Here are just a couple of skin facts dealing with numbers—very large numbers.

As part of our soapmaking process, we keep a record of each batch of soap we make.  We’ve d 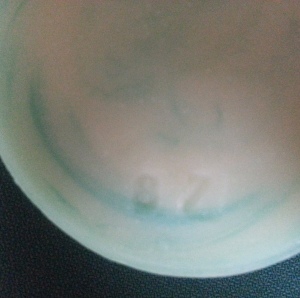 one this since Day Number One, Batch Number One.  Why?  Because somehow my husband knew it was the proper way to start this adventure.

There are several good reasons for keeping a log book as a soapmaker: END_OF_DOCUMENT_TOKEN_TO_BE_REPLACED

I’d like to revisit the Memorial Day post where I mentioned that rain was not uncommon for Del Norte County at this time of year.  As Rick and I were driving over the Hiouchi Bridge last weekend, we reminisced about a rainy Memorial Day weekend from the past.

Until 1989, the Hiouchi Bridge was this rare and beautiful cantilever truss bridge that spanned the Smith River along Highway 199.  Built in the 1920s, it was already scheduled for replacement when its demise was abruptly hastened.  On March 31, 1989 this historic structure suffered serious damage when an overheight, overweight truck crane struck two of the cross frames on its south side. END_OF_DOCUMENT_TOKEN_TO_BE_REPLACED

Some things have to be done before one can bevel soap.  Rick will be beveling this evening and I want to show that part of our process, but when he arrived home today, I promptly met him with the news that the Service Center guy will be here tomorrow to replace the defrost heater in our freezer.  So here stands Rick with blow dryer in hand, melting the ice off the coils.  A heater in a freezer . . . hmmm . . . I think I’ll stick to making soap rather than try to sort that out.

It’s a rainy Memorial Day in Redwood National Park country, but we decided to not be wimpy–it’s not uncommon to have some rain here on Memorial Day weekend–so we trudged out in the drizzle to amend the soil in three new garden boxes.   END_OF_DOCUMENT_TOKEN_TO_BE_REPLACED

Yesterday I posted pictures of a new product for River Bar Soaps: Sunscreen Bars.  If  you read the post, you know I mentioned that I was waiting for an answer from an expert to a question I had about labeling the sunscreen bars.  Well, I received Marie’s answer, and here it is, in part: END_OF_DOCUMENT_TOKEN_TO_BE_REPLACED 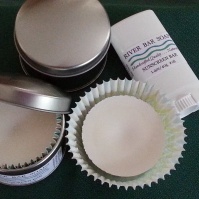 Here Comes the Sun — such a happy Beatles song.  I wonder how many times it’s made me smile over the years?  Well, as promised yesterday, here are River Bar Soaps’ Sunscreen Bars.  I poured some into our normal “tin-shaped” bars and others into small twist-up containers.  The twist-up containers should be handy to toss into a beachbag or backpack. I’m waiting for an answer from a labeling expert about whether we can actually call these “sunscreen” or whether there is some prohibition against doing so.  END_OF_DOCUMENT_TOKEN_TO_BE_REPLACED

This morning I pulled the first of our French Breakfast radishes and ate them for . . . breakfast!  All the seeds I tucked into the soil last month are becoming recognizable as their correlating vegetable plants.  Simply amazing!  Carrots, kale, shallots, radishes, lettuce and snap peas are following the instructions God imprinted into their previous generations: grow and prosper!  I think I love the peas the most.  One of my favorite summer pasttimes is standing in the evening garden grazing on peas ’til I’m full–the best kind of feast! END_OF_DOCUMENT_TOKEN_TO_BE_REPLACED 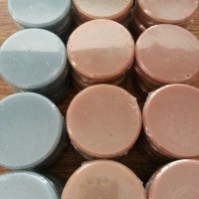 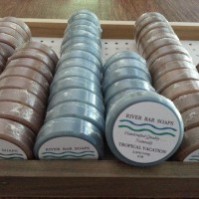 (1) We place each bar in sheet of shrink wrap

(2) We utilize a heat wand to enclose it in a little bag, and

(3) We blow it with a heat gun to shrink the wrap snugly around the bar.

We wrap our soap in a biodegradeable wrap called Biolefin.  END_OF_DOCUMENT_TOKEN_TO_BE_REPLACED

Yesterday afternoon found us with some friends hiking the section of the California Coastal Trail from Last Chance grade to Wilson Creek. Wow, what an incredibly beautiful area is our backyard! Rivers, mountains, tall trees and the ocean: so many choices! END_OF_DOCUMENT_TOKEN_TO_BE_REPLACED

What We’re Talkin’ About